Exactly how Dhoni effected the last ball run out of Mustafizur in the World Cup T20 2016 match against Bangladesh. Read the story below and you will realize why I, you and millions world over are ardent fans of M.S.Dhoni.

Oh, Dhoni bhai, thank you very much for giving all of us such a pleasure. The nation bows before you. 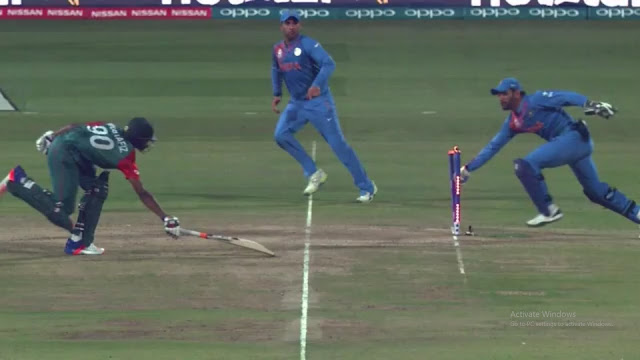 When Pandya bowled the last ball, Mustafizur had already left the crease and when the ball reached Dhoni's hands, he was already half way down the pitch: 10 metres.

Now it was a battle between Dhoni at 13 meters from the stumps (who had to start running) and Mustafizur who was 10 meters away from the stumps with the added advantage of 2 meters (extended bat): 8 meters ( who had already running in full throttle). Mustafizur had a 5 meter advantage.

Dhoni covered the 13 meter distance in 2 seconds (A start that Ussain Bolt would be proud of) and also defeated Mustafizur's extended bat.

Everyone talks about the presence of mind that Dhoni has and the manner in which he removed the gloves for the last ball; yet if we analyze the last ball minutely, we will realize the roaring lion that resides inside the captain cool Dhoni that made him run like a cheetah.

That is the confidence that moves the entire team.


Image via: https://i.ytimg.com/vi/42Qm5u4YFCk/maxresdefault.jpg
Posted by Rangan Badri at 13:58