Sunil Gavaskar aptly reacted by saying IPL has become a soft target for all after the Bombay High court asked the IPL organizers to shift all the IPL matches that are scheduled to be played at various locations in the state of Maharashtra to other places in the country citing the national water crisis.

Dravid's reaction:
"It's a serious issue and the fact that so many people are dying because of shortage of water is serious, but linking it to IPL will trivialise it," Dravid told NDTV on Thursday (April 14). "How can a drought be as important as cricket? If not having IPL will solve the problem, then we should stop playing cricket." 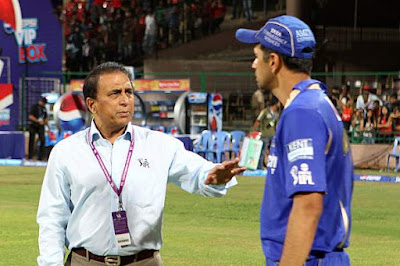 Just two days before, I read another news that was more frightening. The Supreme Court of India asked the Government of India to take over IPL.
Source:http://www.dnaindia.com/sport/report-ipl-2016-supreme-court-asks-whether-government-can-take-over-bcci-role-with-new-law-2201799

Well, the total money involved in IPL is the actual target for various Government and non-Government bodies. Nothing is talked in terms of lacs of rupees but only in crores and that too in US dollars! It is obvious that they too want  slice of it. Such huge money, employment potential and the glitter make the Government to salivate.

If the Supreme court contemplation is by any chance taken seriously and gets implemented, this is what I foresee.

1. The first order would be in accordance with any Indian Government. Out of the  21 member cricket squad, 20% or so should be reserved for Sc and ST.
2. 10% of the team should comprise of women.
3. Soon, there will be a separate portfolio will be created in the cabinet and a minister would be given charge. Naturally, being a Kamadhenu, it will be the most sought after portfolio among ministers.
4. Umpires will be appointed y the MLAs.
5. Cheer girls team would be owned by politicians.

Oh, the list would be really big if I invite you all with your creative input-isn't it?

Yes Sunil Gavaskar, IPL is obviously a soft target and you can foresee worst in the coming years.
Posted by Rangan Badri at 14:44